Tune into Morning Sessions at 9 a.m. Friday as WTMD listener Jenny O'Grady interviews Animal Liberation Orchestra backstage at the 8 x 10. (She won the right to kick Erik out of the host chair during last year's Holiday Helper Auction.) 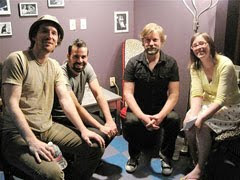 The band's latest album, Man of the World, was produced by longtime friend, collaborator and Brushfire Records label owner Jack Johnson, who essentially became the fifth member of the band. ALO spent two weeks recording live in Johnson's home studio in Oahu, Hawaii. Johnson's approach to recording was a radical departure for the band, who were used to building a song from the ground up.

Although Johnson is known for his laid-back lifestyle, he was all business in the studio. "He was a musical mediator," said drummer Dave Brogan.

"He kept us on our best behavior," adds guitarist Dan Lebowitz. "We only went to the beach a couple times."


You can hear Johnson's influence on the final product. Man of the World is extremely accessible, balancing pop hooks with their jam-band roots.
ALO and Jack Johnson perform at Merriweather Post Pavilion on July 17.

Posted by John Nagle at 3:18 PM No comments:

The Bridge's Kenny Liner on Stuck in the Jam

Tonight at 9 p.m. on Stuck in the Jam, Bug hands over the reins to The Bridge co-founder Kenny Liner. The Bridge have become have developed quite a reputation on the jam band scene with a relentless touring schedule that includes stops at this year's Bonnaroo and All Good Festivals.

Liner's mandolin adds touches of bluegrass and Americana to the band's fusion of classic and Southern rock. Tonight he features tracks from a variety of influences, including Townes Van Zandt, My Morning Jacket, The Avett Brothers and Larry Williams.

Posted by John Nagle at 3:45 PM No comments:

Labels: Kenny Liner, Stuck in the Jam, the bridge 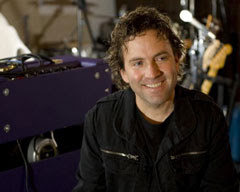 A couple months ago, afternoon host John Mathews received a copy of Colin Gawel's  EP Superior. The title track chronicles a dissolved marriage by the greatest of the Great Lakes, where the characters "break their hearts by its cool, cool waters."

After fronting the Ohio-based band Watershed for two decades (and owning and managing a coffee shop in Columbus), Gawel is launching a solo career with his EP.

John played the song twice in his office and then decided to feature it on the air during his next shift. Listener response, by phone and email, was immediate and ecstatic. And John had the opportunity to share that feedback directly with Colin.

Colin stops by WTMD at 5 p.m. Wednesday, June 2nd, for an in-studio performance and conversation with John.
Colin Gawel performs tonight at the 8 x 10.

As we count down to First Thursday, we're looking back at John Mancini Band's recent visit to Baltimore Unsigned. The band performed selections from their 2009 debut, JMB.

After the album release, Mancini received an honorable mention in last year's Billboard World Song Contest for his track "Buried Alive." And last month the band beat out 250 artists to become New Groove winners on Jambands.com. It's the latest chapter in a journey that started a decade ago and miles away from Baltimore.

“I’ve been writing songs for about ten years and bouncing physically all over the place, from state to state, trying out living in different areas," Mancini says. "I really started getting into songwriting in Colorado, just sort of living the camping life and writing songs, you know, out in the woods and stuff like that. Just strumming and playing with different people and different players.”

Check out the result of all those years of playing at 8 p.m. Tuesday. And don't miss the John Mancini Band when they kick off First Thursday at 5:30 p.m. June 3rd in West Mt. Vernon Park.

As The Dixie Chicks enter the third year of an indefinite hiatus, sisters Emily Robinson and Martie Maguire set out on their own as Court Yard Hounds.

Robison and Maguire grew up playing music together and their voices mesh beautifully on the self-titled debut, featuring standout tracks like "See You in the Spring" and "The Coast."

The duo takes the material on the road this summer with a series of dates on the revived Lilith Fair, including a TBA August 3rd stop in or around Washington, D.C. Or is that just national booking code for a date at Merriweather?