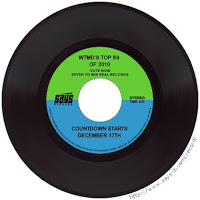 You Voted. We Counted. Now We've Played Them Back!
Thank You for listening and we'd like to ask you to make a gift to WTMD to keep the station Independent-Commercial Free-and playing the music you rely on! 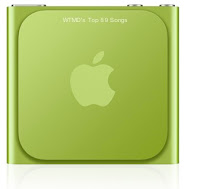 No contribution needed to enter the drawing, but we hope you'll support the station that keeps you in music heaven!
Posted by Steve at 8:17 AM No comments:

Here is your To Do List for the Weekend:

While we Countdown the top 89 Songs of 2010--We need to Count on You to Make an Additional Gift or Become  A New WTMD Member to Keep The Station Strong in 2011!  Click Here To Make Your Gift!

1.  Tighten Up by the The Black Keys
2.  Forget You by Cee-Lo Green
3. Little Lion Man by Mumford and Sons
4.  Paris (ooh La La) by Grace Potter and the Nocturnals
5.  MoneyGrabber by Fitz and the Tantrums
6.  Zorbing by Stornoway
7.  Laredo by Band Of Horses
8.  Slippin by Quadron
9.  Beg, Steal Borrow by Ray Lamontagne & the Pariah Dogs

It's never too late to support your favorite radio station, 89.7 WTMD!

Support WTMD, the station you love with a monthly contribution!

Become a Member of WTMD today!

46.  In Sleep by Lissie
47.  Hey Hey Hey by Michael Franti and Spearhead
48.  Sweet Disposition by The Temper Trap
49.  Cousins by Vampire Weekend
50.  Compared to What by John Legend and The Roots
51.  The Ghost Inside by Broken Bells

52.  Wen my Time Comes by Dawes
53.  Colors by April Smith
54.  Dance Yrself Clean by LCD Sound System
55.  Angel Dance by Robert Plant
56.  Hit 'em Style by The Carolina Chocolate Drops
57.  Everlasting Light by The Black Keys
58.  I can Change by LCD Soundsystem
59.  My Time by Minus the Bear

Make a contribution to WTMD!

80. Next Girl by The Black Keys
81. American Slang by Gaslight Anthem
82.  On the Road to Charlie Parker by Anders Osborne
83.  One Day by Kings Go Forth
84.  I Believe In You by Black Dub

Become a Member of WTMD today!

The Ravens take on the Saints at M&T Bank Stadium this Sunday and getting you battle ready, though with a decidedly more cooperative vibe than on the gridiron, are some of Baltimore and New Orleans finest bands who'll rock the 8x10 stage Saturday night for a pre-game throwdown

Papa Grows Funk and the Honey Island Swamp Band represent the Crescent City while members of The Bridge and Old Man Brown have Charm City's back.

Don't expect tackling or sideline tripping, just lots of Baltimore and bayou roots rock from musicians who have jammed together before and embody the serendipitous spirit of a traditionally music-rich city and one that's becoming one.

We'll get you ready this Friday at 920am on Morning Sessions as we encore a smokin' set from last year by the Honey Island boys! .

Weekend on the Radio Recap

Every Thursday morning at 6:20 a.m. and 8:20 a.m. Sam Gallant of the Creative Alliance shares with you all the cool happenings around town on Weekend on the Radio. In case you missed a detail about a specific event, here's the list for this week.

Posted by John Nagle at 6:20 AM No comments:

Here is the story behind WTMD's new on air studio.  We've gone all HGTV on the place and no home improvement project (we think of the place as home) is complete without the before and after pictures....
Posted by Steve at 7:19 PM No comments:

There’s nothing like the innocent sounds of surf rock and girl groups to mask the desperate pain within. Best Coast’s cathartic California beach pop counters the tortured relationships of its airy, yet alluring siren, Bethany Cosentino.

And like some of the sandy summer singles of the past, she and multi-instrumentalist partner Bobb Bruno keep things simple, with only one song clocking in at over three minutes. Earworm “Boyfriend” typifies the direct and revealing nature of Cosentino’s confessionals, though, it’s not all tortured diary entries; her cover cat, Snacks, inspires one of the tracks on Crazy for You.

Like another Golden State frontwoman, Jenny Lewis, Consentino acted as a child, appearing in local and national commercials. And while lyrically dramatic, the happy, sun-kissed, Everly Brothers-inspired sound of Best Coast might make you play beach blanket bingo with Annette and Frankie, or in the case of the video for "When I'm With You," a certain burger-hawking clown.

Labels: 89.7 WTMD, best coast, Bethany Cosentino, CD of the Week, Crazy for You

If you've never thought just how important your individual financial support is to making WTMD a better radio station, well-Here's the pictures to prove it is!

One of Frontman Club families stepped forward with a very generous gift to renovate our main air studio. In making the gift, they told us they were motivated by WTMD's ability to impact the community and each listeners life. They also told us one key issue in their decision to make this transformational gift to WTMD is the level of community support WTMD receives from its listeners.

I hope you will take this opportunity to make a year end gift to WTMD today.  Your gift, in any amount, is pooled with other gifts and enables the station to bring you more music, interviews and programming everyday.  Not only is your gift important individually, but as a community, all of your support demonstrates how important WTMD is to our community.

You've already to heard the biggest benefit of the new studio:  More in-studio bands! Our friends at Ziger/Snead Architects reconfigured the space so we could have more space to bring bands in quickly and with fewer technical obstacles.  We'd also like to thank Ed Bukont of E2 Technical Services for helping put the place together and also to Vince Fiola of Studio Technology  for building the new furniture.

But the biggest thanks goes to Ryan Glaeser, AKA Bug, for leading this project and putting hundreds of hours putting all together.  Not only is Bug WTMD's Jam Band Expert, but he's pretty handy with drills, hammers, wiring diagrams and pulling cables all around the station.

So here are the before and after pictures.  Thanks again, your involvement with WTMD helped make this happen! 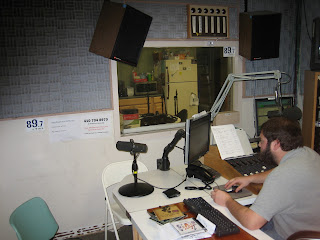 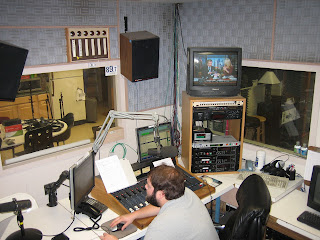 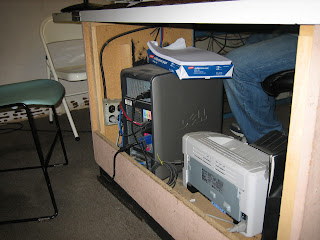 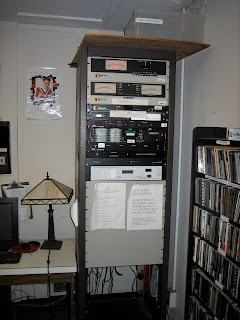 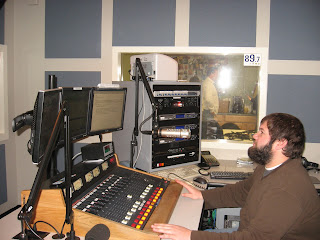 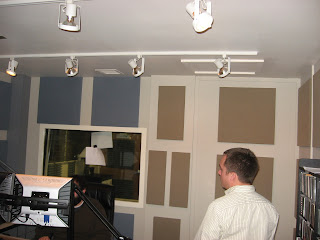 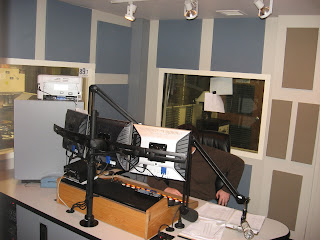 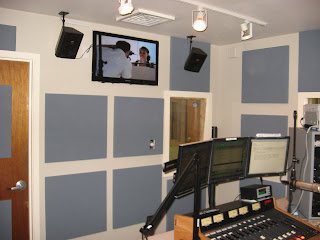 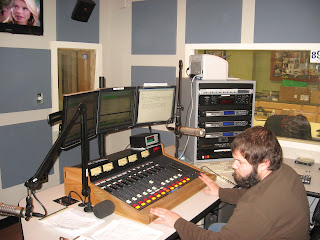 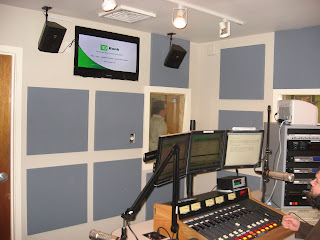 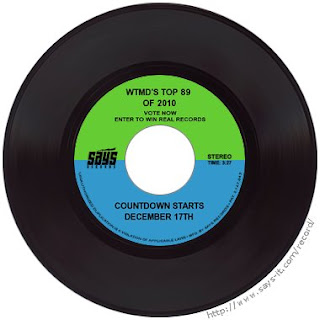 The voting has closed.  Tune in this Friday for the countdown of the Top 89 Songs of 2010!  Your support makes WTMD happen for you every day. Please make a year-end gift to make sure 2011 is an even better year for you and the station!

Check Out the WTMD Staff Picks!

What's better than music? Free music. Producer Nick Jackson has scoured the internet to bring you the best free downloads featured on this week's Altered Fridays, 4-7 p.m.
Wye Oak, “Civilian”
It seems Baltimore's Wye Oak is getting better and better with each album. Here is the title track from their upcoming album, Civilian, due out next year. Jenn Wasner kills her solo at the end, enjoy!

Fang Island (feat. Andrew W.K. and Joe Buzzell), “Patterns On The Wall”
Fang Island released a strong album this year and followed it up with a 7", featuring this song. You can grab the single at their Bandcamp. On a related note, this trend of leaving MySpace for Bandcamp is just grand.
Young Galaxy, “Cover Your Tracks”
Here's a band out of Montreal making some chill music, bro. More on their album Shapeshifting, expected soon.
Posted by Nick at 3:57 PM No comments:

WTMD doesn’t often wander into commenting on news stories or sticking our nose into other people’s business, but as the outrage grows over Denise Whiting’s trademarking of the word “Hon,” some of us at the station can’t get it out of our heads.  We keep trying to figure out why we, and thousands of others, feel anger and contempt for Ms. Whiting, owner of Café Hon in Hampden.

Ms. Whiting is certainly within her right to try and grow a business, build a brand and serve her customers.  But what angers people most is she is using a concept that predates her restaurant.  Ms. Whiting didn’t invent the Baltimore Hon. The images, emotions and memories encapsulated in these three letters are the very heart and soul of our city.

For most of us, the visual image of a Hon, an old Baltimore housewife from the 50s, is encapsulated in the transformation Edna Turnblad makes in Hairspray (the comedy, not the musical).  Hons were authentic women concerned about making sure their kids grew up ok, their husbands got to the steel mill on time and they kept an eye on Baltimore’s neighborhoods making sure they were safe and clean. They always had a pot of coffee on the stove to sip while gossiping with their girlfriends. Hons are selfless and even innocent.

Behind the glasses, the hair and the accent were strong, protective women who lived in their own world and never considered the changes that could take us from the Buddy Dean Show to the Wire in just one lifetime.  Coffee was black-no-sugar, not a Grande Skinny No Whip White Mocha.  Hons remind us that life was simpler once and perhaps we long for a time when a Blackberry was something you made into a pie.

They are our mothers and grandmothers, the older lady down the street we keep an eye on; they are people we care about.  We would never think to exploit them.  And that is what Ms. Whiting has done.  She didn’t invent Hon, she found it, sculpted it, and turned into something that makes money.  Trademarking the word so that others can’t print it is the final act of theft and I think we’ve all been shocked at how Ms. Whiting has manipulated the word and perhaps us.

Sure, we all think Honfest is a blast.  Dressing up in the exaggerated costumes and pushing the essence of the Hon to the limit seemed like we were paying homage to these women. But in many ways the brand Ms. Whiting has built on this word is just plain old disrespectful to the women that it’s based upon. Ms. Whiting is not alone in this stereotyping, we’ve all had a good time dishing the leopard skin prints, the cat’s eye glasses and spending big bucks on those rubber beehives.  I think a little collective guilt is playing into our reactions to Ms. Whiting’s theft of our beloved Hon.

Yet, as the Internet outrage points out, we all feel ownership of Hon. We don’t want the right to use the word in print taken away from us. And we don’t understand how Ms. Whiting doesn’t recognize that she has violated that sense of community.  A sense of community the women of 1950s Baltimore created by just being themselves.  Not being able to print that word on a coffee mug, T-shirt or bumper sticker cuts the rest of us off from people we care about and respect. By crowning herself head Hon, Ms. Whiting has taken away a very personal connection to our past and cheapens our relationship with our City’s heritage.